Everybody tells you what to do, right?  Well, I’m different. Over the next few posts, I’m going to tell you what not to do.  It’ll be kind of like that TV show, “What Not to Wear,” which features fashion faux pas, but this will be more fun.  Shall we count down the Wicked Writing Wrongs? Yes, let’s. 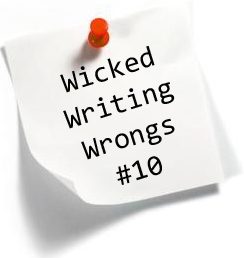 What’s an echo-maniac, you ask?  I’m glad you asked that question.  An “echo”-maniac is someone who repeats himself by saying the same thing more than once, and simply echoing the same point over and over…kind of like this sentence.  It’s not fun to read, right?  In fact, it’s downright boring.

While it’s true that you shouldn’t pound the same point home as if you were bug-phobic going after a spider, it also operates on the level of individual words. Sometimes we come up with a really cool word or phrase…and we get it in our heads and it comes spilling out. Over and over again. Like an echo…sorry.  I’m repeating myself, aren’t I? 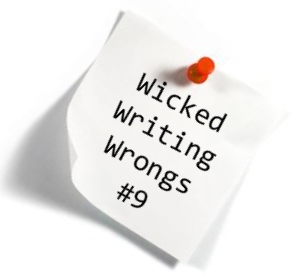 A word steroid is a word that takes a perfectly acceptable reasonably sized word, and beefs it up by adding some extra suffixes to it:

Gold and platinum are materials that share the characteristic of preciousness. – Huh?  That sentence also shares the characteristic of pretentiousness, if you ask me! Believe it or not, you see word steroids a lot in governmental or newspaper writing.  So how do you say that without running afoul of a random drug test? – Gold and platinum are precious metals.

There are other word steroids too, such as the infamous “-ize”:

I’m going to prioritize the project. – Bet you’ve heard that before, but a better way of saying it is: I’m going to set project priorities.

And how about the nasty “-ingly” version:

She smiled charmingly. – This is just a major ick-ick-ick. Instead, write: She gave a charming smile. Or: She smiled with charm.

And if you really want to set yourself up for a major word-steroid drug bust, try this one:

Astonishingly, the graduate student displayed the proficientness to collectivize the research papers.

This is justification for a lifetime sentence of learning to write better sentences!

The post is tagged with: what not to write, writing process, writing tips