Did you ever have a friend who refused to argue about anything?  You suggest going out for Indian food, and instead of telling you that he hates Indian, he says nothing at all, then sits in the restaurant looking miserable and picking at his food while making snide comments about your choice of cuisine. (Don’t you hate that? Doesn’t it make you want to slap him upside the head?) 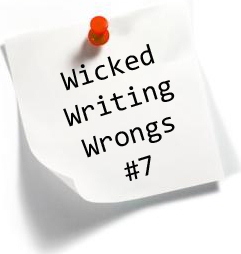 If it happens once or twice, no problem.  When it happens all the time—that’s passive aggressive.

Writing can be passive aggressive too.  It’s a type of writing that is ever-so-easy to fall into.  Here’s what I mean by passive-aggressive writing:

The man was bitten by the dog.

Did the man bite the dog? Or did the dog bite the man?

At first glance, reader who skims the sentence can easily assume it means the man bit the dog.  Readers assume that English sentences are in the order of:

So what’s wrong with that sentence? The passive phrasing puts the thing that is acted upon (the object) of the sentence before the thing that does the acting, like this:

Let’s take another look at that sentence:

Passive:  The man was bitten by the dog.

Active:  The dog bit the man.

Passive:  Bad, bad man to bite that cute little doggie! (I’m shaking my finger at you!)

Active:  Good, doggie, good!  (The man no doubt deserved to be bitten!  Have a treat!)

Generally speaking, you want to stay in active voice, putting the actor  of the sentence before the action and definitely before the thing that is acted upon.  But there’s one place where passive voice tends to rule (not in a good way, I might add): Journal articles.

If you’ve ever wondered why articles in professional journals are so hard to read–other than all those big words.  And the long, complicated sentences.  And that they’re really boring. Not to mention all those numbers and statistics.

Okay, one of the other big reasons journal articles are hard to read is that they tend to have passive voice all over the place:

“This trend was evidenced by the data …”

“A problem addressed by me…”

“This element is perceived by the participants as …”

“These concepts were developed by Canadian researchers…”

All those are examples from actual research journal articles, selected at random.  Every single journal article I checked had at least one passive voice sentence in it.  Compare those passive-aggressive sentences to these revisions:

“The data evidenced this trend…”

“I addressed the problem of…”

“Participants perceived this element as…”

So don’t be passive-aggressive.  Keep sentence subjects where they belong, in front of the verb, and the objects the subjects act upon after the verb.  That way, your readers will politely refrain from slapping you upside the head.